here was no plan, at least not at first.  We were just three American couples “on holiday” as the British like to say.  We had signed up for the British Devon Cattle Breeders Society’s “Devons in Devon Tour” and simply wanted to see the birthplace of our breed and enjoy the scenery.  We had not expected to find that our English colleagues would be going through some of the same commercial pressures affecting the American cattle scene. 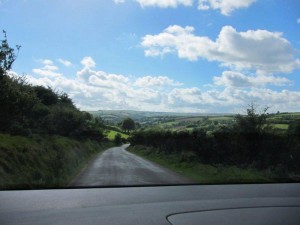 And certainly had no idea that government bureaucrats had taken the breed down a road of no return. That realization came later, though.

From the first, the country side in southwest England wove its spell.  Neat, bright-green pastures crisscrossed the hedgerows, stone fences and narrow lanes.  Farm buildings traced back hundreds of years, even to William the Conquerors’ “Doomsday Book”.  And that’s a thousand years ago.  Some of our hosts had farmed the land for generations but there were others who had prospered in London and now found idyllic pastures to park their pounds.

We were joined on the tour sponsored by the British Devon Cattle Breeders Society by about 40 farmers and ranchers from Australia, New Zealand and Brazil.  And while most of us settled down to enjoy the scenery, it soon became clear that for some, particularly the Brazilians, this was a shopping tour.  Ranching in Brazil is on a scale that dwarfs anything we were accustomed to.  A herd of several thousand Devon was fairly typical.  And the Brazilians were ready with plenty of reais (dollars) to purchase British genetics.

At the second stop, the bidding began.  Tilbrook Grange was home to the great English champion, Tilbrook Cashtiller.  We had seen pictures before coming but they had not prepared us for the star appeal she exhibited standing in the yard that day.  Hurried conversations among the Americans produced a determination to bring Cashtiller genetics to our herds even though English and American law prohibit exporting live animals to the U.S.  It took a few days to gather the courage, but finally, and more than a little nervously, we proposed flushing Cashtiller and Gavin agreed! 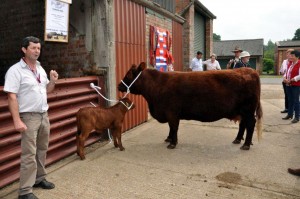 Cashtiller had won every ribbon and every trophy that was available for several years running.  We also knew that her bull calves topped all sales.  She was no longer in competition but everyone that day said she was still in shape to win any show she entered.  That Gavin would agree to share what is probably the most-outstanding British cow of the past 10 years or more, was an act of generosity putting us always in his debt.

But while we excitedly concluded negotiations to flush Cashtiller we continued the tour and soon began to sense a disquieting feeling about some of the cows we were seeing.  And why all those feed stacks  in the corner of barns? The cows were big and heavily muscled but some of those muscles were in the wrong places.  And instead of the ruby red coat we were looking for, there were patches of dark and even blackish hair.

Questioned, our hosts slowly revealed the details of the British Devon scene.  Like all breeds, their Devon were now subject to European Union agricultural rules decreeing that cross-bred animals must be accepted as pure after three generations.  Coupled with the same “bigger is better” mentality infecting the American cattle scene, the result was a Devon breed that had been diluted with the blood of Salers, Red Poll and Red Angus. 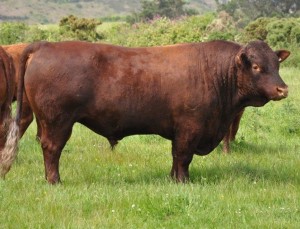 He started it all: Millennium Falcon

Animals of the size we were seeing demanded grain to maintain condition.  Most breeders fed some variation of what were called “nuts”, a barley pellet.  We were to learn later that all this had been the subject of considerable controversy within the British Devon Society.  We only knew that we were disappointed and wondered, if our British colleagues had moved to cross-breeding, was our hope to find pure, traditional English Devon an impossible dream?

It was a relief then, at the seventh stop on the tour, when we walked onto a pasture at Lands End, the very outer tip of the English isle.  There, waiting for us at the gate, was a herd of the most perfect, most uniform set of Devon cows we had ever seen.  And standing just behind the cows was a young bull that literally took our breath away.

We didn’t know whether to throw our arms around the bull or the breeder.  But Ivan Rowe is not a man you get too familiar with, too quickly.  A taciturn Cornish farmer, a former magistrate in Her Majesty’s judicial system, Ivan had been breeding Devon for 34 years….as he said, “breeding them “the way I like’em no matter what anybody says”.

Ivan said he wanted his animals moderate-sized, with deep red coats, horned.  That’s the way Devon were meant to be, he insisted.  “None of this cross-breeding stuff.”  His herd, he said, was bomb proof.  We weren’t exactly sure what he meant but we thought he was probably right. 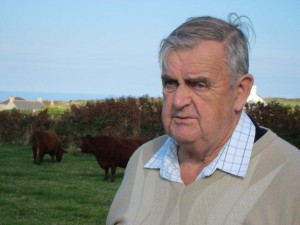 It was then and there that the idea behind Traditional Devon™ was born.  The date was June 11, 2010.  When we returned to the bus, we were like a bunch of excited school children…husbands and wives comparing notes.  We had Cashtiller…could we be lucky a second time with Ivan’s bull?  And we were aware there were other little knots of people on the bus, excitedly buzzing as well.

Incredibly Ivan Rowe was to choose us over overtures from rivals with bigger reputations and bigger checkbooks.  The Brazilians, particularly, were persistent, chasing after Ivan and his bull even after our collection of semen was well underway.  We have never asked Ivan why he chose us.  He may now call us “mate”, but as we said, you don’t get too familiar with the judge.

So we left England after that first visit with two new friends, Ivan and Gavin, and with the promise of genetics from an outstanding cow and equally outstanding bull.  We also left with the framework for a new partnership among us.  A partnership and a commitment…but no budget and no focus.  We only knew we had found two exceptional animals that could make a major difference in our herds.

Back in the States, the focus was soon to come.  As we researched Falcon, we tracked down his original breeder.  She was Shiamala Comer and she was delighted to find someone who loved her bulls almost as much as she….delighted she immediately made up her mind to fly to the United States and visit our herd. 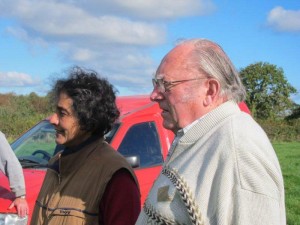 For a week we talked (and sometimes argued) with Shiamala about the English Devon scene and what were the requirements for a true, pure, traditional Devon.  Shi, born in Sri Lanka, married to an Englishman with a grown son who is her strong right arm while Mr. was off racing motor cars, is a lady of strong and uncompromising views.  She could be infuriating, particularly because she was generally right.

It was not easy to give up our own equally strong opinions but finally she convinced us to do some more investigating.  Ivan had already demonstrated that you could raise pure Devon, without any outside blood or shortcuts that were more than the equal of any other animal.  And, Shi said, she could introduce us to other breeders and herds that were doing things “as in the days of old”.

A return trip to England just four months later convinced.  Shiamala had not been at this business as long as Ivan, but her own herd was equally breath-taking.  And she introduced us to two other breeders, Brian Drake and Margaret Elliott.

Brian showed us one cow in particular, Buttercup, that had a bull calf at her side that sold us on the spot.  And Margaret is something like the Grand Dame of English Devon.  Like Ivan and Brian, she had served a long time as a judge for the British society in many shows.  More to the point, she was the woman who was the driving force of the famous Cutcombe herd, which had contributed more champions than probably any other modern farm.  One of her bulls, Millennium, had sired Falcon and another, Jaunty, had been an outstanding national champion. 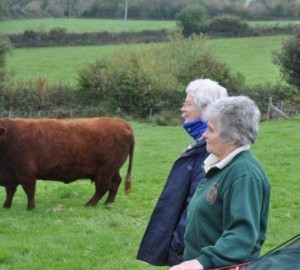 In our discussions with these folks, and in the research our own Wooz Matthews was doing in cooperation with the registrar of the British Society, Gina Lane,  we finally understood what Ivan had meant by “bomb proof”.  It was not only the highest praise for the conformity of an animal, but a recognition of a spotless pedigree.  And as we pored over herd books in the months to come, we came to realize that Shiamala was not only right, but if anything had understated the situation.  British Devon were in the process of being seriously compromised.

It was then that we determined not only to find  British Devon with unchallengeable pedigrees, but to protect those genetics by bringing them to the United States.  We wanted the animals because they were, to us, perfect in conformation but also because of the purity of their pedigrees.  We wanted them for our own herds but we also believed that there would be other. like-minded, American breeders….people who wanted to preserve the very best Devon cows so that, for as long as there are people who love Devon, what is old will be forever new!

Permanent link to this article: http://www.traditionaldevon.com/about-us/