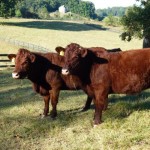 You musta had a beautiful mama! 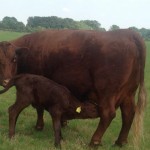 None prettier.  Our champion English cow, Tilbrook Cashtiller, with her latest:  a two-day old heifer at Gavin Hunter’s farm.  Cashtiller, in her competing days, won every ribbon and trophy in sight.  Her bull calves were the top sellers in the Devon national class three years running.

She’s about to turn 13 now…and Gavin tells us he thinks maybe this is enough.  We can only hope he changes his mind. 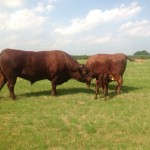 Here’s the happy family:  the sire is Tilbrook Thomas.  TDA bred Cashtiller to another great English champ, Cutcombe Jaunty, and imported the embryos.  We have seven calves from the mating now on the ground here in the States.  The females will all be bred for the first time this fall.  We also have some more embryos safely implanted…and even more waiting.

Permanent link to this article: http://www.traditionaldevon.com/you-musta-had-a-beautiful-mama/

A bit of Devon history….

One of our English colleagues, diagnosis Juliet Cleave, viagra buy had the good fortune not only to be born on the farm where she lives in Cornwall, but her family has kept photos going back more than 100 years.  Juliet has done a remarkable YouTube documentary of her Kew Herd and we think her granddad would be really proud of what she and her husband, Chris, have done with the old herd!

Just turn on the sound and click on the link:

Permanent link to this article: http://www.traditionaldevon.com/a-bit-of-devon-history/ 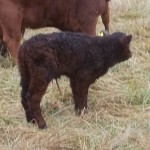 …by Falcon.  And once again he features the deep “ruby red” that pure British Devon are noted for.

This bull calf arrived at Doyle Unruh’s farm in Georgia.  The dam is Goldings Norah 21st, so this little guy is a long way from Lands End.

The Norah line comes from the great Clampit herd, a noted name in British Devon circles for almost 100 years!

Permanent link to this article: http://www.traditionaldevon.com/and-a-third/