And then there were two…. 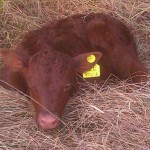 ….two calves by Falcon, that is.  And this young man may actually have been born first.  He’s out of a wonderful English cow, Essington Buttercup 165th.  (see our section on cows for her profile and pedigree)  A number of our embryos are being developed at Doyle Unruh’s farm in Georgia.

It appears this calf was born at just about the same moment her half-brother was being calved in Virginia.  Read more about him in the post below.  Meanwhile, we’re trying to nail down just which of these two wins honors as the first Falcon calf born in the United States and the first pure, traditional Devon born here in decades.

Permanent link to this article: http://www.traditionaldevon.com/and-then-there-were-two-2/ 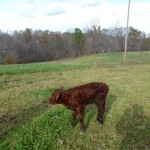 …is a bull calf, here just an hour old but already standing and following mom across the pasture.  He was born at Thistle Hill Farm in Virginia and you can see him if you’re attending the American Devon Cattle Association meeting November 9 and 10.  Well actually you can visit anytime.

Falcon, of course, is Ashott Barton Millennium Falcon, the bull that became the foundation for Traditional Devon America when we first saw him almost three years ago.  The dam is Goldings Snowdrop 113.

The mating took place at a clinic near Cambridge, England and the embryo was shipped here just about a year ago.  The recipient cow is one of Thistle Hill’s best.  He deserves the very best.

Permanent link to this article: http://www.traditionaldevon.com/falcons-first-calf-in-america/

These are the times….

…you know the rest.

If you read our earlier posts, you know that we have been confronted with an embargo on all genetic imports from England.  The villain is a little gnat that carries something called the Schmallenberg virus.  Cows can survive it but the virus can abort or cripple unborn calves.  There’ve been only a few cases in England but, of course, the USDA has to protect American herds.

Several times we thought the alert was over and there’ve been rumors of the development of a test that will reveal the virus’ anti-bodies.

Well, the test apparently has been perfected (in Holland) and is appears we will soon be able to resume flushing cows for their embryos and collecting semen.  However, according to our sources at the USDA, the test will not be able to work with material that has already been frozen.

Worse, our source tells us, such a test is probably not practical given the limited number of embryos that are affected.  Well, our “limited number” is about 50 and that will be a terrible setback to the timing and scope of our program.  It is also a loss of time and money.

Fortunately, we do have representative embryos from all but one of the cows we have selected already in the United States.  Not as much as we’d like and hoped for, but enough to continue.

Permanent link to this article: http://www.traditionaldevon.com/these-times/

Three cheers for the Cotteys!

Angus and Joy Cottey’s Garradon Fuschia swept the top places at the recent British Society show in Devon.  Fuschia was named best cow as well as Grand Champion, besting all the bulls in the show, too.

The Cotteys, of Little Dart Raffe, are not only good friends but our partners in Traditional Devon.  Their earlier bull, Cutcombe Jaunty, plays a key role in our breeding program.

We should also note that another associate, Gavin Hunter of Tilbrook Grange, is to be congratulated as well.  Fuschia’s sire was Tilbrook Fireworks.

Traditional Devon America is very proud to be associated with such top-notch, quality English breeders.

Permanent link to this article: http://www.traditionaldevon.com/three-cheers-for-the-cotteys/