The blockade is lifted….

….after three tense months of an embargo on all cattle and sheep genetic material from England.  (See A Serious Setback below)  We imagine you could hear our cheers anywhere in the US just before 10 this mornng when we got the news.

The embargo due to Schmallenbergers virus had left us without access to about 50 embryos and almost 2,000 straws of semen.  Worse, it left us uncertain about whether we’d be able to continue collecting the samples we wanted of pure, traditional English Devon genetics.

Today, we heard almost simultaneously from our American and British sources that the threat…which actually never really materialized in cattle though some sheep were affected…is over and exports can resume.

We’ve already made plans with our British clinics to ship embryos from four cows and semen from Falcon.  We’re also making airline reservations for our next trip to southwest England.

Permanent link to this article: http://www.traditionaldevon.com/the-blockade-is-lifted/ 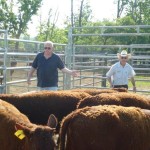 Traditional Devon America took another step into “reality” this weekend when we loaded our calves in North Carolina for their new home pastures.  Glenn Covington and DeKalb Wells had trouble keeping up with the group boarding the trailer for Thistle Hill Farm in Virginia.  They must have heard we’ve been having rain and the grass is good.

For the past six months, these seven calves have been raised at DeKalb’s farm near Rose Hill and weaned from their recip mamas a few weeks ago.  Five were slated for Thistle Hill, including the two bull calves; two heifers went to Walker Century Farms in South Carolina.

The sun continued to shine on our efforts…meaning it suddenly turned cloudy with scattered showers for the trip home.  That made for cooler travel for the animals.  In fact, at a stop for lunch, there was a heavy rain for awhile and the temperature actually dropped into the 50s. 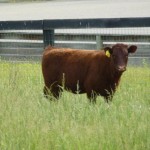 And here’s what we had been waiting to see.  An English Devon on our own pastures.  This heifer is the happy result of a mating of champions:  Tilbrook Cashtiller, who swept every show she ever entered, and the legendary bull, Cutcombe Jaunty.

There’s still a long way to go…more calves to birth in October…but for a few days at least we’ll be unavailable; busy in the pasture getting to know our new family.

Permanent link to this article: http://www.traditionaldevon.com/moving-day/ 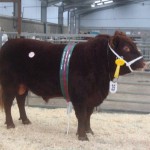 Tilbrook Hat Trick has become the third bull calf in a row by the great cow Cashtiller to top the British spring show and sale.  Breeder Gavin Hunter had such confidence in Cashtiller after her first two successes that he hesitated only a moment before selecting the sports term “hat trick”, which means three- in-a-row, as the name for this calf.

Cashtiller is probably the greatest British cow of recent years, sweeping every contest she entered.  We also didn’t hesitate in selecting her to anchor our line-up of cows at Traditional Devon.  Seven of her calves are already on the ground here in the States and we’re tempted to call one of the bulls:  “Grand Slam“.  But we couldn’t get around the health restrictions to send him back for the next show….and we wouldn’t want to sell him anyway.

Permanent link to this article: http://www.traditionaldevon.com/third-times-the-charm-2/

We just learned that all imports of semen and embryos from England have been blocked because of an animal virus that is raging through the herds and flocks of Europe.  The virus, called Schmallenburg virus, after the small town in western Germany where it was first detected, is carried by midges, a small flying, biting insect.

Apparently it is carried far by winds and some have now apparently been deposited in southern England.  So far, three cases have been detected in cattle.  While it makes adult cows sick, they recover quickly.  It does, however, kill calves in utero.

The embryos and semen Devon has stored in England would seem to have been safely in quarantine since before the first cases appeared there, but since no one is absolutely sure what they’re dealing with, both British and American officials have closed down shipments.

It could be a serious blow to the future development of our program here.

Permanent link to this article: http://www.traditionaldevon.com/a-serious-setback/