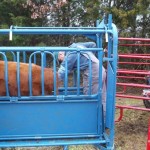 ….begins to unfold in South Carolina as embryologist Dr. Randall Hinshaw implants an embryo from Goldings Norah 21st in a recip cow.   The picture demonstrates the many facets to this project.  A cow taken from a pasture in England, flushed at a clinic near Oxford, the embryo flown to the United States, the recip waiting in South Carolina for the ministrations of the embryologist from Virginia.  And at the same time this was happening on Doyle Unruh’s farm, a similar scene was being played out at Thistle Hill Farm near Hume Virginia with other embryos and other recips.  Other cows, another veterinarian, but all part of building our herd of pure, traditional English Devon.

It’s an exciting time for us with lots to coordinate as the various parts we selected and assembled starting two years ago are now finally all coming together.  The first calves are on the ground in North Carolina (see previous post), embryos being transplanted here in the States, another shipment of embryos waiting to clear quarantine in England, another cow we have selected about to be flushed at the Oxford clinic, and a bull returned to its farm this week after semen collection in Penzance.

Permanent link to this article: http://www.traditionaldevon.com/the-next-chapter/ 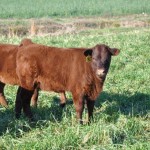 We’re checking, but we think this is the first English Devon calf born in the United States since the Pilgrims brought a few cows here in 1623.  We know of several live bulls imported about 50 years ago but they were not mated with English cows.  Now, thanks to modern technology, here is the first Traditional Devon calf in America.

She’s the result of a mating, in a clinic just outside Oxford, of the great English cow, Tilbrook Cashtiller and the equally famous champion bull, Cutcombe Jaunty.  The embryos were frozen, then flow to the United States.  There are six more heifers and bulls just like her and,we hope, more to come.  These very legal immigrants were calved by recipient mothers at the Dekalb Wells farm near Rose Hill, North Carolina.

This is the “payoff” for two years of work and occasional frustration so all of us in this British-American partnership are celebrating today.

Permanent link to this article: http://www.traditionaldevon.com/the-first-since-1623-2/

…for Traditional Devon.  The wheels have been set in motion, cialis in Virginia and South Carolina, viagra order for the next set of pure English Devon embryos. 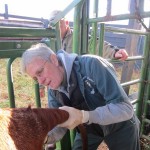 Here, veterinary technician Jane Narrimore in Virginia readies a recipient cow  to receive one of the 17 fertilized eggs from British cows which were removed…frozen…and shipped to the United States a week ago.

The embryos will be inserted in two weeks and then the waiting game begins.  Typically, no more than 50 per cent of transplants work but the success rate varies widely.  To improve the odds, Doctors Tom Massie and Randall Hinshaw will synchronize their work to match insertion in the American recipients ovulation cycle to within minutes of the time the eggs were flushed from the British donors.

Permanent link to this article: http://www.traditionaldevon.com/one-small-step/

….and once again, nothing was easy.

We have received another shipment of embryos from our partners in England, but once again it was not without some “nail-biting” moments.  We were racing the Christmas crush this time and so, when British agricultural officials were slow in clearing this group of embryos, we were put right up against the deadline.

The embryos not only needed to be here before they got swamped in all the Christmas mailing, but our recipient arrangements required that embryologist Randall Updike have the embryos in time to begin the transplant process immediately after the holidays.

So we were timing it close when Stella Scholes at Bovine Genetics finally got the OK to send the canister holding the precious embryos on December 12th.  She got them out the very next day and American Airlines had the shipment in Chicago the evening of December 14th.  And there, everything suddenly went dark.  No news the 15th…an unconfirmed report that USDA would do its inspection the next day…but no inspector showed up.

On Monday, December 18th, we really were worried.  How long would the canister hold its nitrogen charge that kept the embryos frozen.  The folks at Hawkeye Breeders in Iowa—our agent in this project—contacted American Airlines once again and asked that the  canister be weighed.  The charge was holding!

But with USDA still not responding, drastic measures were called for.  We contacted US Senator Jim Webb’s office and he came through!  In less than two hours the Senator’s aide called back:  USDA “was apologizing profusely”…it was a fax problem…the embryos were ready to go.

Finally, late today, we got the long awaited call from Hawkeye: our embryos from Goldings Norah and Snowdrop and Essington’s Buttercup had arrived in good shape.  In a few days, they’ll be trans-shipped to Dr. Updike in Virginia for implanting.  And then we can start worrying all over again.

Meanwhile, back in England, Stella is already readying the next shipment and we can worry about that, too.

Permanent link to this article: http://www.traditionaldevon.com/an-important-milestone/