Our advisory panel of breeders:

e’re honored to partner  with seven of England’s top breeders  and to be working with them to assemble traditional Devon genetics for import to the United States.  All these men and women—spanning several generations—are well-known on the British Devon scene.  Their number includes former presidents of the Society.  Four of these eight have spent many years as official judges for all the great cattle events around England.

We have met with these breeders individually and as a group many times; walked their pastures for days; stayed in their homes, treatment and on some well-remembered occasions carried our discussions to a nearby pub.  We thank them for their hospitality and their patience, buy particularly through our countless questions and examination of their breeding records.  They shared our enthusiasm as we searched for best representatives of absolutely pure, traditional Devon that could be found.

Finally, we also want to note our appreciation for the efforts of Gina Lane, the registrar of the British Devon Cattle Society, who worked with our Wooz Matthews, registrar of the North American Devon Association, to assure that all the animals we chose had unassailable pedigrees.

Special thanks as well go to the folks at Bovine Genetics and UK Sires, who handled all our embryo and semen work.  In addition to their professional expertise, they were invaluable in helping us through the maze of British and European agricultural rules.

The breeders, whom we consider our partners and friends, are featured  in the order in which they joined our advisory panel. 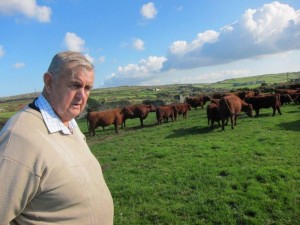 Many words could be used to describe Ivan Rowe of Lands End,  but “formidable” seems to fit him best.  A large man, who has clearly lived his 78 years outside at the tip of England, jutting  into the Atlantic.  He has been raising cattle on a family farm that goes back to his great-grandfather.  Less obvious, at least until you talk to him for awhile, is the fact Ivan also spent 33 years as one of Her Majestry’s magistrates.  But then you watch how he stands apart from most other Devon breeders, making his own judgments, and you can see the two worlds coming together.

Ivan has been a judge of men and also, for a dozen years,  a judge of cattle and herds  for the British Devon Cattle Society.  He has been president of the Society, too.   He began as a dairyman while still a boy and switched to Devon in 1990.  His Goldings herd was built on absolutely pure foundation stock and he’s kept it that way.  Ivan disposed of his dairy herd before moving to Devon.  “I suppose I could have kept both”, he says, “but I didn’t want to divide my attention or my loyalties.”

Today, Goldings herd numbers about 70.  Steers are weaned and shipped off to a finisher.  About 10 of the heifers are featured in shows and sales every year; the remainder, sold off the farm as seed stock.

Ivan describes himself as “an old fashioned breeder”, stubbornly resisting fads and trends.  “I’m definitely out of today’s mainstream,” he smiles, starts to expand, but judiciously catches himself.   Then he adds:  “I breed for what pleases my eye.”  Ivan Rowe is a man accustomed to letting his judgments speak for themselves. 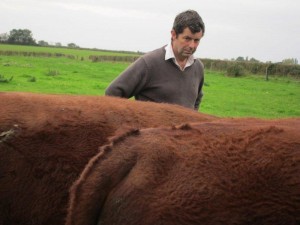 Equally at home in a calving pen or a posh London drawing room, Gavin Hunter is a kind of bridge between the traditional and the new breed of English cattlemen.  With his brother, James, the Hunters run a family farm of about 1,250 acres that was founded at the end of World War II.  Only 20% of the farm is devoted to the Devon operation, which is directed by  Gavin.  James oversees the larger-grossing grain operation.

Devon made their first appearance on Tilbrook pastures in 1960 and the herd is generally kept at 80 cows.  Just doing the basic math,  Gavin estimates his farm has accounted for more than 4,000 Devon over the years.  Tilbrook also does a thriving meat business, with both shops and consumers  arriving at a scheduled time as fresh meat returns from the butchers.  The little that remains is immediately frozen for later sales.

Tilbrook has become the most influential Devon farm in England in recent years.   Certainly their great champion cow, Cashtiller, contributed greatly to their reputation, but Gavin also singles outs about 10 excellent bulls for sale every year, probably more than any other Devon breeder.  Tilbrook heifers also are in great demand.   Gavin chooses his females for level backs, sound legs and feet and adequate but not big frames.  He also bases his judgment on the calves they raise.  The result is a herd that is uniform and balanced.

Respected by his colleagues, both new and traditional, Gavin was recently the president of the British Devon Cattle Society and he is one of the  few selected year after year to judge both animals and herd competitions . 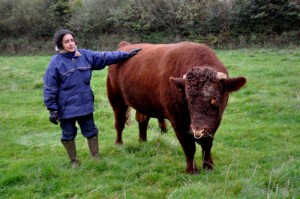 No one has been a more outspoken supporter of ‘proper” English Devon than Shiamala Comer, whose 350 acre farm is situated on fabled Exmoor, the legendary birthplace of the breed.  Shiamala is a native of Sri Lanka and has lived in both the United States and England.  Like her family, she now farms in hill country that reminds her very much of home.

Shiamala believes not only in traditional Devon but in raising them in traditional ways with a minimum impact on the land.  Her organic operation has received Britain’s highest environmental rating. There are also three wildlife preserves within Ashott Barton.

While Shiamala’s sometimes blunt ways have ruffled the feathers of the British Devon establishment, she is respected by all for the depth of her knowledge of cattle and breeding.  It was she who bred Ivan Rowe’s prize bull, Millennium Falcon, and Ashott Barton pedigrees can be found in many Devon herds.

Shiamala was generous with both her hospitality and time, guiding her American visitors through the maze of country lanes to introduce us to many of the breeders who would eventually become our partners.  She constantly urged us to see “just one more” herd or animal and was an indispensable member of this Traditional Devon™ undertaking.  She has our special thanks. 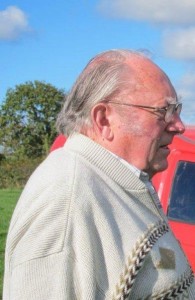 We’re not aware of anyone, not in England or the world, who has been breeding Devon any longer than Brian Drake.  He and his brother took over the family farm in 1950 at the premature death of their father.  Essington farm had been raising commercial Devon for some time and the two brothers decided to switch to an all-pedigreed herd in 1955.

Brian lives today in the home he was born in and now raises Devon with his son, Stephen.  A judge for the British Devon Cattle Society, like many of the members of our advisory panel, Brian is well-known throughout England and most Devon herds have at least one Essington cow at their center.

In recent years Brian has scaled back the size of his operation but that has only meant that the quality has gone up.  Brian is a quiet-spoken man but, as with that television commercial some time ago, when Brian speaks, his colleagues listen. 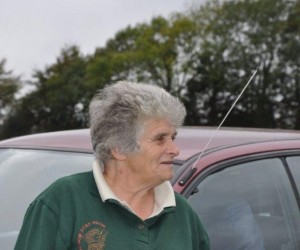 In British Devon circles, when Margaret Elliott talks, other breeders listen.  Margaret was born into a Devon family.  Her grandfather had the original Cutcombe herd back in the 1930s…her father managed to save three of those cows in the dispersal…and today Margaret and her husband maintain the family tradition at the farm where she was born.

The Elliott’s purchased the herd and the property from her parents in 1971 and focused on commercial Devon for many years to pay the bills.  But it gave her grounding in “what works” so that she was fully ready when she decided in 1995 to focus her attention on developing fine seed stock.

Margaret is not only a superb judge of animals (she’s one of the few women, certainly one of the first, to be selected to judge Devon for the British Society) but a walking encyclopedia of the history of the breed.

Cutcombe Jaunty was only one of a string of outstanding bulls but, as Margaret remembers, “he was always the one to show himself well.”  She considers him, years later, to still be one of the finest examples of a Devon bull.  “He just didn’t have any flaws.” 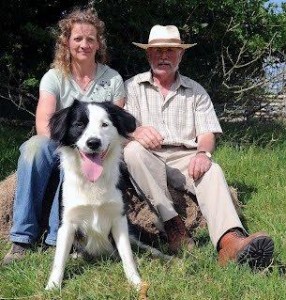 We first met Juliet when she was our tour guide for a group of international Devon breeders who visited England in 2010.  But it wasn’t until a year later that we visited her farm and got to know her husband Chris (and Walt, in the foreground).  Chris was born on a neighboring farm and the two wasted a lot of years mooning over each other across the hedgerows.

Finally, one of them, we won’t try to guess which one, burst through the brambles and Kew Herd was born.  Like many Cornish farmers, the Cleaves combine their love of Devon with a large flock of crossbred ewes.  Juliet’s enthusiasm is infectious and to her sharp eye she brings considerable scholarship.  She began as a dairy farmer, went to Bicton Ag College and traveled New Zealand on a Holstein breeders’ scholarship.

Chris is content to be the silent partner but the anchor in their partnership.  He also finishes several hundred cattle a year back at his family farm just across those hedgerows.  Devon, commercial cattle and sheep are all just part of the romance of this engaging couple. 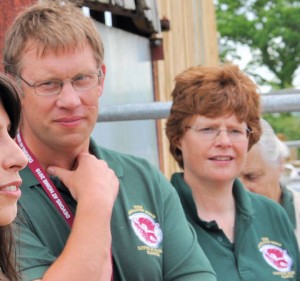 The Cotteys are a young couple who have already made their mark among British Devon breeders.  Their great bull, Cutcombe Jaunty, was enough to secure their reputation.  He also converted their herd into one of the outstanding herds in the southwest.

From the first, the Cotteys were assisted by Angus’ parents who had been cattle farmers all their lives.  Angus is a police officer whose work takes him all around England and Joy is a midwife. (Angus insists that was not why he chose her)  And just to prove that romance is not dead, the Cotteys put their bull in with the herd every June 10th, their anniversary.

Other than the romance, it also means that Garradon calves outside, which is somewhat unusual among British breeders.

Permanent link to this article: http://www.traditionaldevon.com/our-advisory-panel-of-breeders/